What is Palladian Architecture? An Idiots guide to Palladianism

Now, let me first of start by saying that I am no expert in Palladian architecture. In fact I have no formal training in Architectural History whatsoever. However, that's largely the reason why I started this blog. As I became more interested in history and architectural heritage, I wanted to created a place where I could not only share my experiences, but further expand my knowledge and hopefully that of others. This is where eheritage comes in!

The magnificent Palladian north front of Kedleston Hall with its giant portico.

As I started to visit and write about more country houses, I became fascinated with the architecture of these grand buildings, and I noticed more and more how a lot of these places resembled Greek and Roman temples. The architecture of Palladianism then became a common theme, but what is it and where did it come from?

I want to share with you some of the things I have learned along the way, so let's kick things off with a beginners guide to Palladian architecture.

Andrea Palladio: The Father of Palladianism

To understand what Palladianism is, we first need to understand where it came from. And of course we can't talk about Palladianism without talking about the Venetian architect Andrea Palladio, from whom the architectural style gets its name. Born in 1508 in Padua Italy, Palladio came from relatively humble origins. The son of a Miller, Andrea was apprenticed to a sculptor at a young age, and having later moved to Vicenza to join a guild of stonemasons, gained employment with a workshop specialising in stonecutting.

Palladio's particular skill was in carving monuments and decorative sculpture, and with a keen interest in classical architecture he began developing his own distinct style. Known largely for his Villas, Palaces and Churches, Palladio set out his revivalist style over four books of architecture known as Quattro Libri dell Architettura.

Palladio's style then was very much based on the architecture of Ancient Rome, but with a more contemporary execution and an emphasis on proportion and symmetry. Unlike the dramatic Baroque style of architecture, Palladio's renewed classical style was deliberately restrained in its execution, with little emphasis on decoration.

Andrea Palladio's vision of taking elements of Ancient Greek and Roman architecture and incorporating them into contemporary architecture, became known as Palladianism.

Palladianism was first introduced into England in the early 17th century by the legendary architect Inigo Jones. Having made a number of trips to Italy and studied the works of Palladio, Jones developed his own style of Palladianism in London. This can be seen in his early classical works, namely Queens house in Greenwich and the Banqueting House at Whitehall. A visionary in the world of architecture, Jones was seemingly ahead of his time, with the Civil War and his death effectively delaying the widespread uptake of Palladian architecture in Britain.

The early 18th century saw a huge revival of Palladianism in England (Neo-Palladianism), with the previously popular Baroque style falling drastically out of fashion. Largely championed by Richard Boyle, Lord Burlington, who sponsored the translation of Palladio's four books of architecture into English, Palladianism exploded on the architectural scene like nothing seen before. Neo-Palladianism, as it became known, was a more refined interpretation of Palladio's works, with Lord Burlington's own home, Chiswick House, being one of the first neo-Palladian structures to be built in England.

Before too long, Palladianism was all the rage in England, with opulent country homes popping up around the country, and wealthy merchants and aristocrats competing to build the next big thing. Considered one of the finest Palladian mansions in England, Holkham Hall in Norfolk likely set the benchmark when it was fully completed in 1764. Built by Burlington and his protégé William Kent, this spectacular mansion took 30 years to build, and to this day serves as one of the most spectacular examples of English Palladianism.

Of course Lord Burlington wasn't the only driving force behind the eventual state sponsored adoption of Palladian Architecture. The Scottish architect Colen Campbell is also considered one of the founders of the 'Georgian Style', with his groundbreaking book Vitruvius Britannicus, or The British Architect (1715), featuring early neo-palladian designs. Campbell was incremental in the popularisation of Neo-Palladianism in Britain and America, with both he and Lord Burlington taking the works of Jones and Palladio and modifying them into to a distinctly English style of domestic architecture.

Where is Baroque was seen as being representative of Catholicism and foreign reliance, British Neo-Palladianism was a homegrown, more restrained style of architecture, which following a shift in Politics was quickly adopted by the aristocratic elite. Neo-Palladianism was particularly championed by the 'Whigs', the political group who controlled the government at the time.

Wentworth Woodhouse is the UK’s largest private house and features the largest facade in Europe.

A spectacular example of this drastic change in taste can be seen in the evolution of Wentworth Woodhouse in Rotherham. Having literally just completed a monumental house in the Baroque style, Thomas Watson-Wentworth's Whig contemporaries were unimpressed. Consequently, Watson-Wentworth immediately embarked on the construction of an epic Palladian extension. This colossal building project saw the creation of what was considered the first 'great Palladian house' in England, and features the longest façade of any house in Europe.

For an inside video tour of Wentworth Woodhouse, and to learn more about it's colossal restoration, you can view my documentary here.

There are few country homes in England that haven't had some sort of Palladian influence. The great Baroque masterpiece that is Castle Howard had a fashionable Palladian extension added in the mid eighteenth century, and the design of Kedleston Hall was heavily influenced by the spectacular Palladian masterpiece, Holkham Hall.

Palladianism then is defined by a strict adherence to proportion and symmetry, with the incorporation of classical elements. Temple fronts (pediments supported by columns) and Venetian windows are defining features. The villas of Palladio tended to be square, symmetrical structures built to a strict mathematical formula, with some featuring a portico on each elevation to protect the occupants from the blistering sun. These villas were designed to be grand in appearance, but with austere decoration.

It's fair to say that the designs of Palladio were more suited to the warm climate of Italy, something that Inigo Jones was conscious of in his reinterpretation of Palladianism for the English weather. Whilst retaining many of the defining features associated with Palladio's works, he did away with some of the traditional classical elements. This is evident in the design of the Queens House he built in Greenwich, the first truly classical building in Britain.

The National Trust’s Kedleston Hall is considered a neoclassical masterpiece.

Jones' close association with King James I did him no favours when the English Civil War broke out in 1642 and he lost his position as Surveyor to the King. Up until this point, Palladian buildings in England had been pretty modest affairs, but with the revival of Palladianism in the early 18th century, this fashionable style became synonymous with the new mega mansions being built by the countries Political elite. Focus also shifted onto crafting magnificent formal gardens, which were often considered as important as the house.

The small square houses of Jones then where becoming a thing of the past, with the less restrained Neo-Palladian structures ever increasing in size, scale and magnificence. The focus of Neo-Palladianism was now more about building great façades, with the previously detached farm buildings of Palladio's villas, now increasingly being incorporated into the main structure as massive wings, sometimes with their own porticos. This is the case with Holkham and Kedleston.

Unlike the principles underpinning Palladio's designs, the architecture of many of Britain's new great houses could hardly be considered plain. Palladio would hardly recognise his own influence in Holkham Hall for example, with many members of Britain's aristocracy commissioning houses based on their own interpretations and needs. The subsequent emergence of Neoclassicism then with its slightly more relaxed style, was a natural progression from Palladianism. This newer, more playful classical style bore striking similarities to Palladianism, with Scottish architect Robert Adam very much at the forefront of this movement.

I really hope you've enjoyed reading this article. If you have learned something new then that is certainly a bonus! What I hope for with this blog is to create a community where people can share experiences and discuss heritage. It would be great to hear from you so please use the comments section below and share your thoughts.

Thanks so much for stopping by, hope to see you again soon!

What is Palladian Architecture? An Idiots guide to Palladianism

What is Palladianism? From 16th century Venice, to 18th century London, this is your beginners guide to Palladian architecture.

A look inside one of England's most magnificent Elizabethan Prodigy Houses: History and tour. 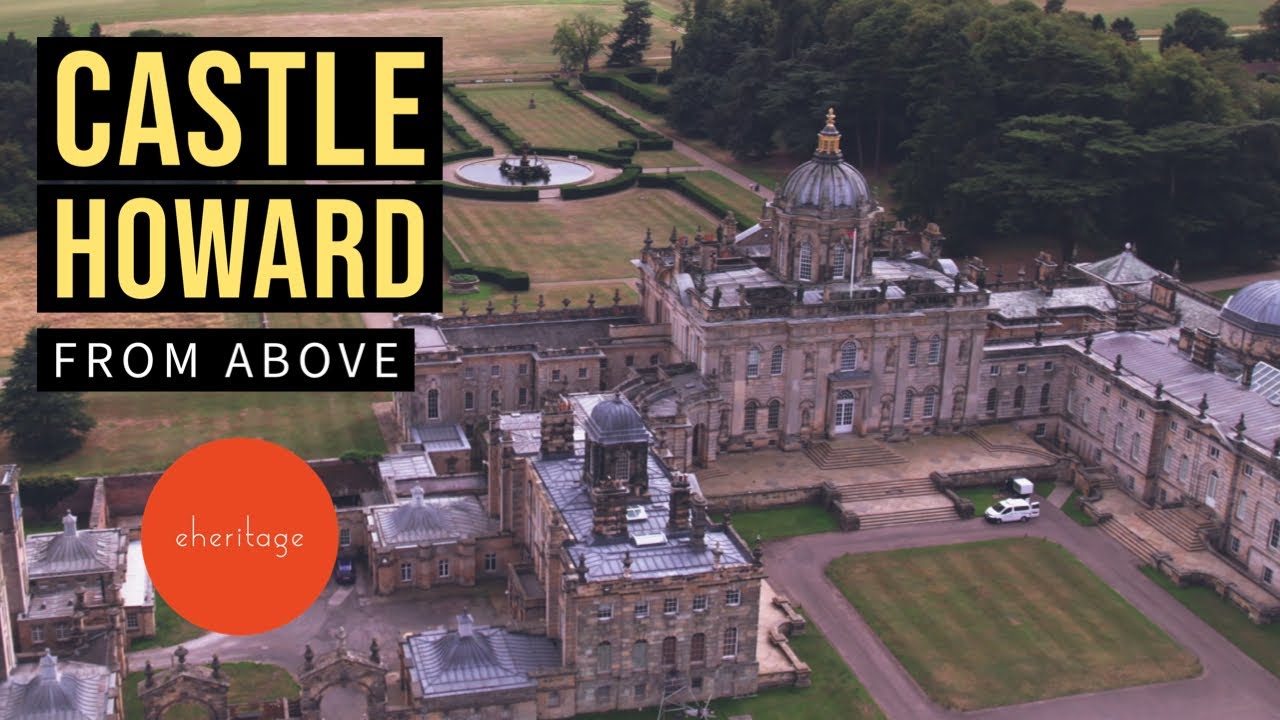 Castle Howard from above: Cinematic film.

Like never seen before, see the magnificent Castle Howard from above in this short relaxing 4K cinematic film.
bottom of page